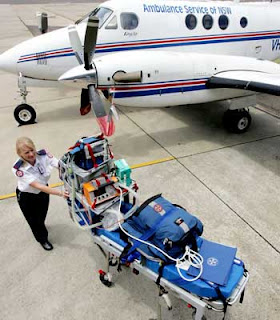 Increasing obesity has prompted an Australian state to seek larger planes for the country's famous "Flying Doctor" service, ambulance and government have said.
New South Wales state has just put out a tender to assess the cost of obtaining two larger new planes for its air ambulance fleet, which is flown under contract by the Royal Flying Doctor Service to service remote and rural areas.Recent global surveys have repeatedly highlighted Australians as among the most obese people in the world, despite the country's association with an active, healthy lifestyle and love of sport.
The two new planes would be able to carry patients up to 260 kg (573 lb), nearly twice the current limit of 140 kg (308 lb), a spokeswoman for the state's health ministry said. "The ambulance service has obviously seen a need," the spokeswoman said.
A New South Wales ambulance service spokeswoman said it followed similar moves by other parts of the service, including ground ambulances and helicopters, to accommodate larger patients.Asked if the move was prompted by increasing levels of obesity, she said: "Essentially, yes."
.
Posted by The Man at 7:52 AM