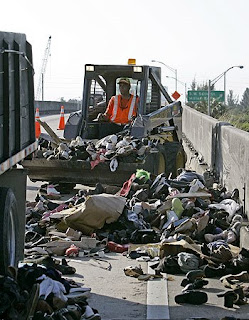 Thousands of shoes were dumped on a Miami expressway causing significant traffic delays.
The Florida Highway Patrol received the report during rush hour Friday morning, Lt. Pat Santangelo said. A private contractor brought a front-end loader and a dump truck to the half-mile stretch of highway. Workers were able to clear at least one lane after a short time by sweeping all the shoes to shoulder, but delays were expected to last until all the shoes could be removed.
Santangelo said the shoes appear to be used, and most were tied together in pairs. He says he's looking for a charity to take the shoes, rather than sending them to the dump.
Santangelo says he's not sure where the shoes came from. There were no signs of a crash, and no one stopped to claim them.
Click here for more pictures
.
Posted by The Man at 11:51 AM