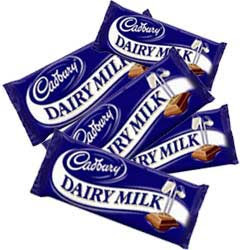 A Devon woman who eats 30 bars of chocolate a week has just celebrated her 100th birthday.
Peggy Griffiths, of Abbotsham, has scoffed an estimated 70,000 Cadbury's Dairy Milk bars in her time.
Her lifetime chocolate consumption has been estimated at an incredible four tons.
Peggy said: "When I was young I could buy a bar of chocolate with my pocket money. It only cost tuppence and tasted exactly like it does now."
Her daughter Eileen Osborne, said she ran a sweet shop in the 1930s but it went bust because she ate all the profits.
Eileen said: "When mom was a little girl, her mother told her that sweets were bad for you but chocolate was good.
"She absolutely loves it. She's a chocoholic and her diet agrees with her."
.
Posted by The Man at 8:20 AM