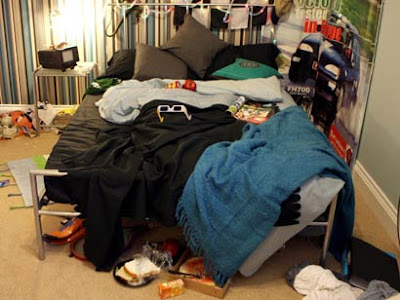 A man called police because his 28-year-old son wouldn't clean his bedroom.
Andrew Mizsak, of Cleveland, Ohio, called 911 after a domestic argument got out of hand.
His son, also called Andrew, had thrown a plate of food across the kitchen table and clinched his fist at his dad when told to clean his room.
Andrew junior, who serves on the local school board, told the Cleveland Plain Dealer: "I know this looks bad."
Mr Mizsak, who lives with his parents and also works as an independent political consultant, was "crying uncontrollably" after being told to clean his room, according to a police report.
.
Posted by The Man at 2:42 PM

I think "somebody" has a little problem...

"His son said he was embarrassed to have taken police away from more important work".

Lemme get this right. He's 28 and still living with his parents, yet the part of the story he finds embarrassing is that the police were taken away from more important work?! Wow.
"Also, the uncontrollable crying.