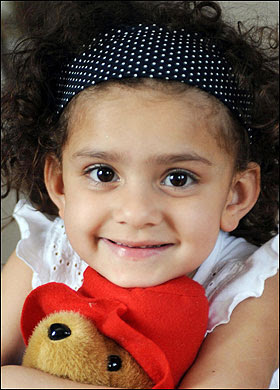 A 3-year-old girl who fell into a coma after getting meningitis stunned her mother when she woke up singing the Abba hit "Mamma Mia."
Layla Towsey was so sick after getting the brain infection that she suffered a heart attack and had to be put on a life support machine. Her mother even kissed her goodbye.
But five days later, Layla slowly started to regain consciousness.
"We had been preparing for bad news as the life support machine was keeping her alive," said Layla's mother, Katy. "But on Sunday I could hear her singing 'Mamma Mia' quietly. I couldn't believe it. I knew then she would be OK."
Layla, from Gidea Park, East London, had learned the song after seeing the "Mamma Mia!" movie. She is now on her way to a full recovery.
"It's one of her favorite songs - she loves it," Katy added. "She got as close to death as you can get. She's a miracle."
Layla was diagnosed with meningitis B after a rash was spotted on her leg.
.
Posted by The Man at 9:12 AM