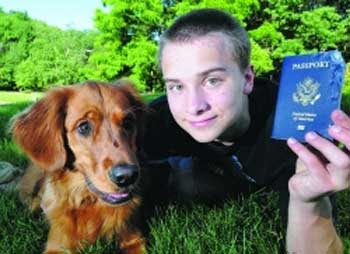 Twenty minutes before Jon Meier was set to depart for a long-anticipated trip with his North High Spanish class to Peru, his mother delivered some bad news: the dog had eaten his passport. Actually, the dog didn't eat the whole thing. "He had chewed a little bit off the corner," said Meier, 17, who just completed his junior year at North. "The only thing you could not see was a few numbers. Other than that it was pretty much intact. A square centimeter or so was really all that got taken off of a corner." For safe keeping, Meier had placed the passport in a waist band designed to be worn inside the shirt so pickpockets have a harder time lifting money or documents. The waist band was on a table when their dog Sunshine, a 1-year-old golden retriever, grabbed it. The waist band was borrowed from a friend and the different smell may have aroused the dog's curiosity, Meier said, noting that it is ironic that a device intended to protect the passport may have been the reason it was damaged. Sunshine also chewed up some cash, he said. Still, Meier left that day, June 16, for the 12-day trip.
The students took a bus to Chicago O'Hare International Airport, then took a connecting flight to Miami. Airline officials in Chicago had no problem with the cornerless passport. "The Chicago airport said it was fine and they let me fly to Miami with the group," Meier said. "In Miami, after we had already had a flight delay, we started to board and they wouldn't let me on. "They said that Chicago shouldn't have let me come down in the first place," he said. Authorities told Meier it didn't matter that most of the passport was intact and legible. "Mutilated was the word they used," he said. "They knew it was a group trip. They weren't able to take that into account. It still wasn't by their code." Officials at the Miami airport told Meier that if they let him out of the country with the damaged passport, he would have trouble getting back into the U.S. His Spanish teacher, Chico LaBarbera, intervened on Meier's behalf, but the airline officials wouldn't let the student continue on the trip. While a plane left with the group, Meier took a flight back to Chicago, where his parents picked him up at 4 a.m.
.
Posted by The Man at 11:39 AM