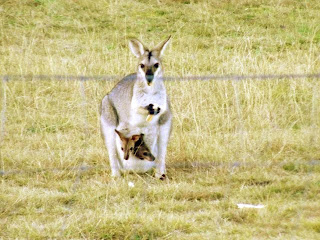 A wild wallaby sighted in eastern Australia has a rare predicament for a marsupial mother — she is carrying twins in her pouch.
The whiptail wallaby and her identical pair of offspring have become regular visitors to a small farm near Ellesmere in Queensland state.
Scientists say it is very unusual for a wallaby, a smaller cousin of a kangaroo, to have twins, and rarer still for a growing pair to survive in the cramped confines of the mother's pouch for so long. They appear to be several months old.
"I was very surprised," farm owner Peter Balsillie said of when he first saw the twins squeezed into the mother's pouch three weeks ago. "Most afternoons you see both heads. Sometimes you see a head and the other's back leg sticking out."
Balsillie spoke by phone Thursday from the farm, where he feeds bread daily to the mother and around six other wallabies that visit with her. He said the twins look the same but he has never seen them leave their mother's pouch.
Kangaroo expert Gordon Grigg, emeritus professor of zoology at Queensland University, said that judging from photos he had seen, the twins, which have already grown a wallaby's characteristic fur, would soon become independent of their mother.
"It's very unusual, especially that she's looked after them through to that size," Grigg said.
.
Posted by The Man at 12:38 PM