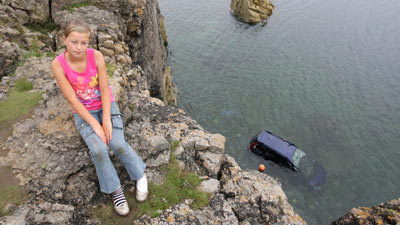 An 11-year-old girl had an incredible escape after she leapt out of a moving car seconds before it plunged over a 250ft cliff.
.
Paige Dean, 11, had been listening to music in her grandfather's parked car when she accidentally knocked off the hand brake, reports the Daily Mail.
She tried to steer the vehicle and put the brake on but as it picked up speed over 200 yards and she threw herself out as it careered towards the precipice at a campsite at Benllech in Anglesey.
Paige, of Kinmel Bay, near Rhyl, said: "I was listening to music on my mobile phone when I dropped it. As I reached over to get it I accidentally knocked the hand brake off.
"I was rolling towards the edge of the cliff and I was petrified. I thought: "I've got to get out". I was shouting: "Help me granddad"."
Paige managed to manoeuver the car around one tent but ploughed into two other empty ones before hitting some gorse bushes.
She said: "In the end I decided to jump out and let the car go. I'm so glad I did. I saw the car fall off the cliff. I definitely would have died."
Witnesses estimate the car was doing around 30mph when it plunged 250ft into the sea. Grandfather Billy Dean, 63, had parked the Citroen C4 on a grassy slope.
He was horrified when he saw the vehicle go over the edge because he thought Paige was still inside, and that her younger brother Cameron, seven, was in the car with her.
Billy Dean said: "It was a nightmare. The car will have to be hauled out of the sea and I don't know what the insurers will say. But all I'm bothered about is that Paige is all right."
.
Posted by The Man at 3:14 PM