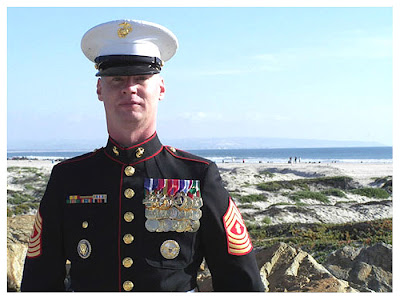 FBI: Prodigiously decorated California man never served in military
NOVEMBER 11--Just in time for Veteran's Day, a California bank employee is facing federal charges for allegedly masquerading as a decorated Marine and wearing a host of bogus medals, including the Purple Heart, Bronze Star, and Navy Cross. Steven Burton, 39, is scheduled to surrender tomorrow in U.S. District Court in Riverside, California (Burton, who has never served in the armed forces, was named last week in misdemeanor criminal information charging him with the unauthorized wearing of military medals). According to a search warrant affidavit, Burton's charade was discovered after an actual Navy commander, Colleen Salonga, ran into Burton at their high school reunion. Online records indicate that Salonga and Burton graduated in 1988 from Alhambra High School in Martinez, California (and that their class's 20th reunion was last October). Suspicious that Burton was playing dress up, Salonga asked to take a photo with him. That image was later provided to FBI agents. A subsequent investigation turned up another photo of Burton in uniform as well as blog postings in which he recounted his "combat experience" and tours in Iraq and Afghanistan. In the real world, Burton is employed at Rabobank in Palm Springs, California.
.
Posted by The Man at 6:17 PM