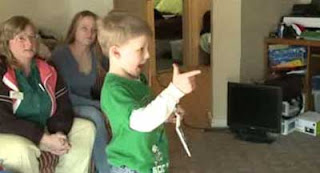 A Michigan boy reportedly has been suspended from school for curling his hand into the shape of a gun and pointing it at another student.
Erin Jammer, said her son, Mason, was just playing around when he made the gesture.
"I do think it's harsh for a six-year-old. He's six and he just likes to play. Maybe what you could do is take his recess away. He's only six and he doesn't understand any of this," Erin Jammer said.
But officials at Jefferson Elementary School said the behavior made other students uncomfortable, and they suspended Mason for the remainder of the week.
School officials said Mason had been warned repeatedly against pretending to aim his hand at students but continued the behavior over several months.
Jammer told the paper her son isn't violent and doesn’t have toy guns at home. She suggested a less harsh punishment, like taking Mason’s recess away, might be more effective in teaching him not to make a gun with his hand.
"He's only six and he doesn't understand any of this," she said.
.
Posted by The Man at 1:18 PM