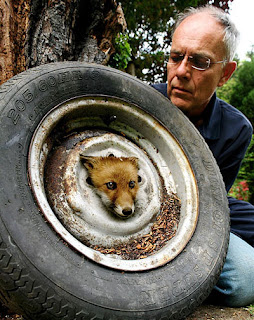 They are meant to be among the most cunning of all creatures – but a fox cub was left a bit worse for wear after being outfoxed by a car wheel. The inquisitive creature got stuck fast when he poked his head through the discarded wheel in a back garden. It is thought the cub – nicknamed Dunlop – may have been trapped for hours trying to extricate himself. Fortunately, the terrified 12-week-old was spotted by homeowner Kim Strugnelll, who called in wildlife volunteers. They later returned Dunlop to the garden, where he lives with his parents and five siblings.