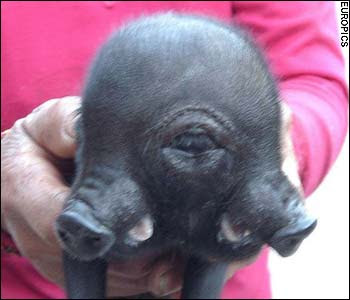 Hot in the (many) footsteps of the six-legged cow and the three-legged duck comes another animal you won't find on Old MacDonald's farm - the two-mouthed, three-eyed Chinese piglet.
· How About That? Because news doesn't have to be serious
· Digger eats his way to being Britain's biggest horse
· In Pictures: More animal oddities
Born in Huimen village, Menla County, China, the piglet was unable to take milk from its mother, forcing farmer Yang Qiaofen to feed it using the mouths it had on either side of its head.
As well as the extra mandibular equipment, the puzzling porcine was blessed with an extra eye in the middle of its forehead, earning it the nickname "Cyclops".
The seventh of seven in its litter, young Cyclops was the only abnormal birth.
While it is able to feed - "both mouths can drink at the same time," noted a surprised Yang, who is feeding it on powdered milk - it is unable to stand properly.
· UK to sell pigs' trotters to China Cyclops' mother was artificially inseminated, and local vets are nonplussed as to the origin of the genetic mutation.