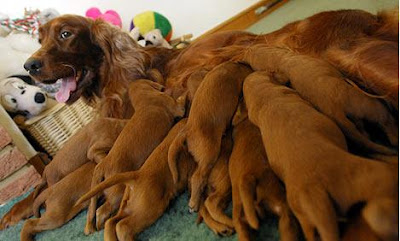 An Irish setter has had a record-breaking 16 pups - after wolfing down battered cod from the local chippy. Kelly's bumper litter of puppies is proof that fish is just the job for a dog's dinner. Her owner Dee Farndell last night revealed battered cod was the secret behind the stunning baby boom - the biggest in her 35 years of breeding.
Puppy love: Irish setter Kelly with her bumper brood of 16 pups’ Two-year-old female Kelly endured an amazing 10-hour labor to bring the staggering brood into the world on January 15. Over the last couple of days, the new arrivals have opened their eyes and started to explore their new surroundings at Zilveren Kennels, Terrington St Clement, near King's Lynn, Norfolk. Mrs. Farndell, 56, said: "I always say when the dogs are pregnant that what you put into the mother is what you get out in terms of quality.
Dog's dinner? Kelly's owner believes the secret to her breeding success lies in omega three oils in the battered cod she feeds her animals
At three weeks we feed them fresh chicken with complete food, gravy and vegetables. At six weeks we give them battered fish for the omega three oils. The top dog breeder added: "We just give them the really good quality stuff which is high in protein." We have 14 adult Irish setters here and I've got tins of tuna and pilchards which they get two or three times a week. It keeps their coats nice and shiny and oils their joints."
The record-breaking litter, which entered the world on January 15, have begun opening their eyes and exploring their surroundings over the last couple of days
Dave Audley, who runs the Three Cottages Fish and Chip Restaurant in North Walsham, is president of the Fish Fryers' Association. He said: "Everybody thinks fried food is bad for you but fish cooked in batter is very healthy because the batter prevents the fat getting into the fish - it is actually steamed. "I didn't know it had this effect on dogs, but it obviously proves the health benefits." After the birth, Mrs Farndell and her husband Malcolm, 58, put their puppy love to the test with a 24-hour bedside vigil to ensure the family survived its first few days. "It was Kelly's first litter and will probably be her last - it was terrifically hard work," she said. "The mother and puppies are all fine. I think it is me that is beginning to struggle." I was fine up until number 13 but then we felt her tummy and could feel other puppies moving about. We didn't panic but when we got to 15, I said: 'Please, Kelly, no more.' There was one more and that was it. "They have an acre field and they get at least an hour a day of solid running. They are extremely fit and this is why Kelly was able to have this many puppies without a Caesarean." Mrs Farndell said Irish setters usually deliver a litter of between nine and 11 puppies after a pregnancy term of nine weeks. Four of the dogs will be kept back to follow in their grandfather's paw-steps as show animals, while the others will be sold off as pedigree pets at a price of £700 each. The puppies have a daunting family reputation to follow as their grandfather Thendara Don Corleone was a double champion at Crufts, winning best of breed in 2006 and 2007. He was named after the Mafia boss from the Godfather movies who chillingly asked if his rivals wanted to "sleep with the fishes". Now his canine descendants have decided to eat with the fishes instead.
Posted by The Man at 9:27 AM