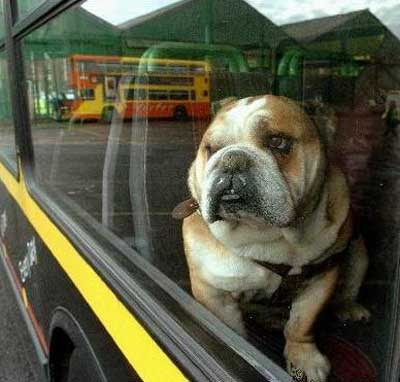 Six-year-old bulldog Louis shocked Blackpool's early rising commuters at around 7am on Monday morning when he hopped on board a bus in South Shore traveling into the resort. The wayward hound left the driver of the Blackpool Transport bus so astounded he contacted his Rigby Road base for advice on how to deal with his extra passenger.
Meanwhile his worried owners, Phil and Anne Wood, were scouring nearby streets looking for Louis – who escaped when heavy winds blew open a gate outside their Lytham Road home. Concerned Phil, 57, was only updated on the AWOL mutt when he had a stroke of luck after ringing the police.
He said: "It was sheer coincidence – one of the ladies on the desk said she had spotted a large brown dog on their bus. I couldn't believe it because he has never been on a bus before."
Chris Sage, the inspector on duty, advised the astonished driver to keep the pet onboard as he came into the firm's Rigby Road depot. He said: "We told the driver to issue an unpaid ticket (which the owner would pay later) for the dog, but understandably he was reluctant to approach the dog."The bus came into town and changed drivers but he still didn't get off. The dog's owner rang and we told him to avoid paying 40p for another journey he could arrive to pick up his dog in Cleveleys."
It was only when Louis' remarkable journey came to an end close to the stricken ferry Riverdance that Phil could finally collar the adventurous bulldog. Phil added: "It is amazing what he did. But he does everything on instinct so it is not surprising he got on when he saw the bus arrive."
Posted by The Man at 10:02 AM