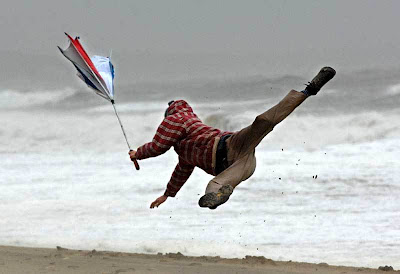 This is a great picture that appeared on the cover of a very small county news paper here in the southwest of England. It was taken on the coast as a major storm rolled through last week with sustained winds of 50 mph with 70mph gusts!!! The photographer was out doing shots of the raging storm surge on the water, and just happened to be in the right place at the right time to catch this shot. On the inside of the newspaper it showed a series of 3 pictures displaying the entire launch and fall of this hapless coastal wanderer.