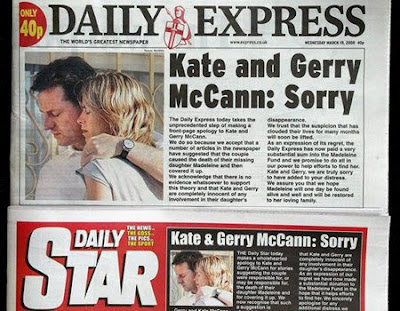 Madeleine McCann's Parents Receive $1 Million, Front-Page Apologies in U.K. Newspapers
LONDON — The parents of missing British toddler Madeleine McCann have received more than $1 million in damages and profuse apologies from tabloid newspapers for "numerous grotesque" and "defamatory" articles suggesting that they caused their daughter's death.
Kate and Gerry McCann said Wednesday that Express Newspapers has agreed to pay the equivalent of $1.1 million, or £550,000. The couple's lawyer said the money would go into a fund they have set up to help find their daughter.
Express has also been forced to say it's sorry for more than 100 inaccurate articles written about the McCanns, according to Sky News.
Posted by The Man at 11:41 AM

Labels: "AMBER ALERT", In the News