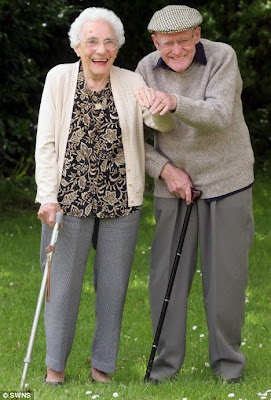 Still together after 80 years, Britain's oldest married couple celebrate their 'oak' wedding with a simple kiss. As with any married couple, there are times when Frank and Anita Milford don’t quite see eye to eye.
But they have never let the odd disagreement get in the way of their love for each other and their dedication to their marriage.
To prove it, Frank, 100, and Anita, 99, today celebrate their 80th wedding anniversary, equalling the record for England’s longest-ever marriage.
They say the secret to a lasting marriage is to iron out your arguments before bedtime and share a kiss and a cuddle every night before bed.
Mrs Milford said: ‘It’s our golden rule. Couples these days don’t last long because they often don’t take enough time for each other.
'Our advice to young couples would be to make time for a little romance every day.’
Mr Milford added: ‘To win over your sweetheart you need a dose of old-fashioned chivalry and don’t let your standards slip. We do everything together even after 80 years.’
The pair met in 1926 at a YMCA dance in their home town of Plymouth. They married two years later, on May 26, 1928, and after the register office ceremony popped to the cinema to catch a Charlie Chaplin film.
Shortly after they moved to a bungalow in the city’s St Budeaux district, where they lived until 2005. Mr Milford worked at Devonport Dockyard until retiring at 60.
The couple have two children, Marie, 78, and Frank, 73, five grandchildren and seven great grandchildren.
Mr Milford said: ‘We’re proud of what we have achieved. When we started we had low wages and worked very hard.
‘The war years were tough - a bomb even dropped on our house. But we have comethrough it.’ Since moving to a nursing home, the couple have taken up a range of hobbies.
They have just received a letter from the Queen congratulating them on their ‘oak’ anniversary. Their 80 years together equals the English record set by Percy and Florence Arrowsmith of Hereford in 2006. Mr Arrowsmith died a fortnight after celebrating the anniversary.
Guinness World Records says the longest British marriage was that of Thomas and Elizabeth Morgan of Caerleon, South Wales, who were married for 81 years 260 days until her death in 1891.