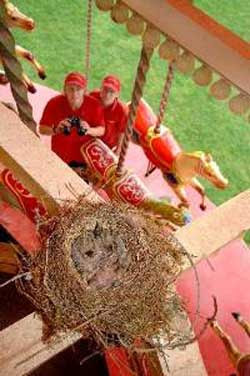 Three song thrush chicks have hatched in a nest in Nottinghamshire - on top of a funfair carousel. The chicks, thought to have hatched about 10 days ago, were spotted by staff at Wheelgate Park in Mansfield. The adult birds moved in four weeks ago and built a nest high up in the structure of the carousel. They fly in to feed the chicks when the ride stops.
The song thrush is a garden songbird whose numbers have declined so much it is on the RSPB's warning red list. Ken Foster, team leader at Wheelgate Park, said: "The chicks are doing fine and both parents are flying in to feed them when the ride stops and customers get on and off. We make sure we allow plenty of time. "However, the chicks seem very happy having a bite to eat while twirling around on the carousel, they obviously don't suffer from motion sickness!"