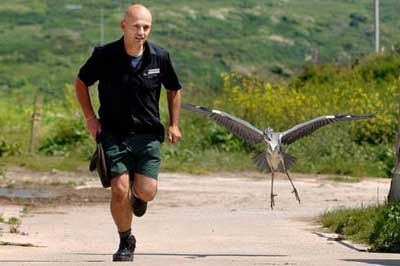 Teaching an orphaned heron to fly by running alongside it with arms flapping and squawking may sound like a bird-brained idea – but for Gary Zammit it's a flight of fancy that has worked. The hand-reared grey heron – called Dude – is now soaring to heights of 21m (70ft) – and comes back when called.

The wildlife expert took the unusual approach to get the rescued bird in the air after its mother was killed in a storm. Mr Zammit, 42, began running in a field with food in his pockets so Dude would follow him and build up his strength.
He then began waving his arms and making a squawking noise until the bird copied him – and eventually took off. 'I ended up getting really involved and running alongside flapping my arms like an idiot,' said Mr Zammit. 'Eventually he began half flying at a height of around 3ft, and he's gone on from there.'
.

Labels: In the News, Nature, Video