Woman was fired after shaving head for cancer charity 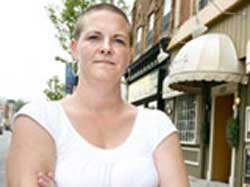 When she took part in a local fundraiser for cancer research, all Stacey Fearnall thought she had to lose was a full head of hair.
Instead, the 36-year-old waitress at Nathaniels restaurant in Owen Sound, Ontario, who raised more than $2,700 for the charity Cops for Cancer in exchange for her locks, was laid off when she showed up for work earlier this week with a shorn head.
The mother of two, was told by her boss to go home after she refused to wear a wig.
Posted by The Man at 10:50 AM

Labels: In the News, Not Right, Pictures