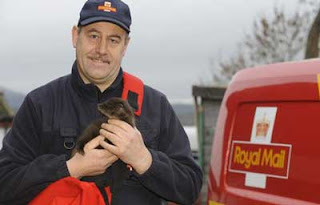 A postman who rescued a baby otter on a Scottish roadside took it on a 220-mile tour of the country in his mailbag.
Kenny Wilson, 50, of Tweedbank, in the Borders, spotted the cub - named Orla - lying on the A7 near Stow on Sunday.
He stopped his car, popped the animal in his mailbag to keep it warm and then bought it some kitten milk which he fed it through the tube of a ballpoint pen.
"She seemed happy enough and during our journey she kept crawling up my neck looking for more warmth."
He then took the otter with him on a Mini car enthusiasts' rally before taking it to an animal rescue center.
The six-week-old otter was said to be doing well at the Arthurshiel center near St Boswells in Roxburghshire.
.
Posted by The Man at 8:16 AM