St. Louis odor a mystery but not dangerous 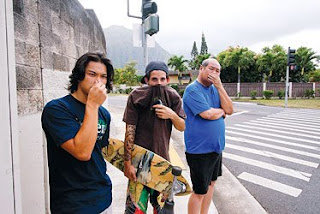 Firefighters and gas company officials in St. Louis said they do not know the origin of a foul odor in the region but tests found it is not dangerous.
St. Louis firefighters and Laclede Gas workers said they investigated the odor, which numerous residents of the St. Louis area have reported in recent days, early Sunday and performed tests that verified that the air remains safe to breathe.
"People are wanting us to come out and check to give them reassurances that everything was OK," St. Louis Fire Capt. Robert Keuss said Monday. "We've checked it out and it is not dangerous."
Laclede Gas officials said they have determined that the odor is not natural gas related.
"We may never know where the smell actually came from," Keuss said. "We're telling the residents that it will eventually drift away. We're just hoping it goes away soon."
.
Posted by The Man at 8:13 AM