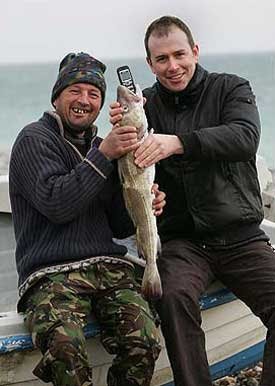 Fisherman found my lost phone in the belly of a 25lb cod ...and it still works after a week in a fish
A man who lost his mobile phone on a beach was amazed when it turned up — in the belly of a massive cod.
Andrew Cheatle thought his Nokia handset had been lost at sea after it slipped from his pocket.
But a week later his girlfriend’s mobile rang and it was fisherman Glen Kerley saying he’d found the phone in a 25lb fish.
Andrew got the handset back, dried it out — and amazingly it still works.
Andrew, 45, said: "I was messing about with my dog and my phone must have fallen out and been swept out in the swell.
"I kept calling it but I gave up hope after a couple of days."
He was shopping for a new phone with girlfriend Rita Smith, 33, when her mobile went off.
She told him: "Your old mobile number is calling my phone."
Andrew continued: "She said some guy was going on about my phone and a cod so she handed it over to me and he told me where he had found it.
"I thought he was winding me up but he assured me he had caught a cod that morning and was gutting it for his fish stall and that my Nokia was inside it — a bit worse for wear.
I didn’t believe him but went to meet him and found it was my phone — a bit smelly and battered — but incredibly it still worked after I let it dry out."
Trawlerman Glen, 45, had tried to use the phone but it didn’t work. So he took out the SIM card and put it in his handset to try to trace the owner.
Glen, of Worthing, West Sussex, said: "Cod are greedy fish — they’ll eat anything. They have big heads and big mouths.
"I’ve found plastic cups, stones, teaspoons, batteries and I’ve also heard of someone finding false teeth in one.
"This fish was about 25lbs and about 4ft long — not unusual but bigger than average.
"I know what it’s like to lose your phone. It can be really frustrating. So I thought I may as well make a few calls to see if I could get it back to him.
"It was a bit smelly but I was glad to return it."
Andrew — who runs an online retail company — still uses it.
He said: "It was working but it kept playing up so I had to get the circuit board changed in the end. But now it’s fine. I know it sounds a fishy tale but it is 100 per cent true."
Posted by The Man at 1:10 PM