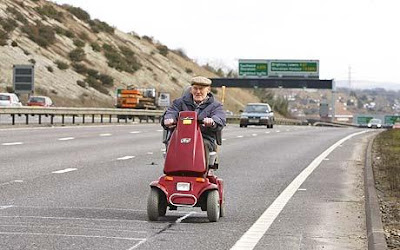 90-year-old in 8mph mobility scooter takes wrong turn and ends up on dual carriageway
All Stanley Murphy wanted when he popped out on his mobility scooter was to pick up a newspaper from his local shop.
But the 90-year-old took one wrong turning and ended up on a busy dual carriageway with cars and lorries thundering past him at speed.
Undaunted, Mr Murphy kept his "pedal to the metal" and continued trundling along in the centre of the slow lane at his top speed – 8mph.
He was eventually spotted by a truck driver who realised the pensioner was in imminent danger as he drove along the A27 in Shoreham, West Sussex.
James Dunne, the owner of a paving company, pulled over and put on his hazard lights to try to get the Mr Murphy to stop his mobility scooter during the incident on Thursday morning.
Mr Murphy, though, kept going.
Mr Dunne, 46, from Worthing, recalled: "The old chap looked confused and wasn't going to stop at first. He was about to overtake when he finally gave up.
"He didn't say much and looked pretty shell-shocked. He said he was trying to drive back to his home where he lives with his daughter.
"He wasn't even on the hard shoulder but right in the middle of the slow lane. He wouldn't have stood a chance had he been hit."
Police were called and officer arrived and drove Mr Murphy home. Mr Dunne put the Atlas mobility scooter on the back of his truck and returned it to Mr Murphy's bungalow, close to the Holmbush roundabout where he mistakenly got on the slip road to the A27.
Safely back home, Mr Murphy said: "I went out to get a paper and took a wrong turning. I don't know how I ended up on the A27 but I'm thankful to everyone who helped me."
Sussex Police thanked Mr Dunne for coming to the pensioner's aid.
PC Jim Lockwood, who drove Mr Murphy home, said: "I would like to thank the members of the public who stopped to help.
"I would also like to thank the driver who put his flashing lights on to prevent the incident worsening and who helped deliver the old gent's scooter to his home address."
A spokesman said it was unlikely police would take the matter further.
The spokesman said: "An electric mobility scooter is a mechanically propelled vehicle.
"As such it would need to have a number plate and tax disc before it could be legally driven on a main road like the A27.
"However, this gentleman was obviously confused and in the circumstances it is unlikely that we would take any further action."
A spokesman for the Royal Society for the Prevention of Accidents said: "We are very pleased to hear that there was not an accident and the gentleman got home safely.
"We don't know what caused him to take a wrong turn but a slow-moving mobility scooter is obviously not suitable to be on a very busy three-lane A-road.
"The Highway Code contains an extensive section of advice for mobility scooter users and we would urge anyone who owns one to read it carefully."
MORE Pictures
.
Posted by The Man at 1:19 PM