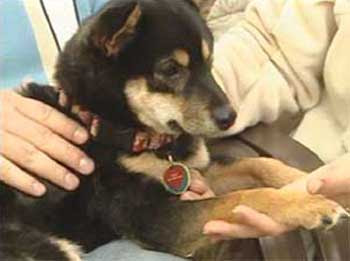 The Boulder dog that was taped upside down to a fridge and rescued by police now has a new name and a new home.
The dog is no longer named Rex but Yoshi and was adopted by Shannon and Amy Park of Castle Rock.
The 10-month old Shiba Inu was abused by its former owners. 20-year old Abby Toll was charged with felony animal cruelty. She is the girlfriend of 21-year old Bryan Beck who was also ticketed on suspicion of misdemeanor cruelty.
"The biggest question that comes into our minds is why would you take out your frustrations on an innocent animal," said new owner Shannon Park.
The Parks own two other Shibas and couldn't resist adopting Yoshi when they heard his story. "Seeing him enjoy life is such a joy, it's just such a treat watching him play and run and wiggle around with toys," said Amy Park. The family wanted to help the Humane Society in Boulder by letting the public vote on the dog's name. For a suggested donation of $5, people could vote online. "We've been calling him "baby" or "little buddy" until we found out this morning what his name actually turned out to be," said Amy Park.
Yoshi means "good luck" in Japanese.
.
Posted by The Man at 2:43 PM

Its sad that no matter what people do to abuse animals, they rarely ever seem to do any serious jail time. That would hurt them more than a fine. Time at hard labor...