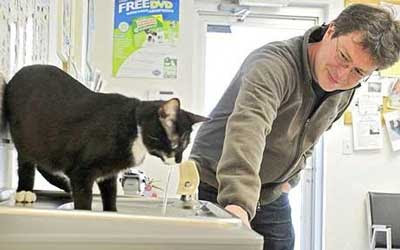 A black-and-white kitten named Sparky has captured the hearts of a British couple, who traveled nearly 4,000 miles across the Atlantic Ocean to central Michigan to adopt it. Rose and Chris Rasmussen were in Harrison on Tuesday to adopt the cat from the Clare County animal shelter, where the young cat has become a mascot of sorts since he arrived last August."Sparky likes to explore," Betty Beadle, a volunteer at the shelter, said. "He destroyed Christmas trees twice." The Rasmussens discovered Sparky on Petfinder.com, a pet adoption website.
They could have had him shipped to the London suburb where they live, but instead decided to make the journey to adopt their new pet."He took me here on the other side of the Atlantic," Rose Rasmussen said. "I thought they would say, 'You guys are completely mad".' Paperwork, a rabies vaccination, a six-month quarantine and other formalities followed before Sparky was cleared to depart for Britain.
Dave Gendregske, the animal control director for the county, said: "A lot of people would ask, 'Why come from England?' When people meet Sparky, find he has a dynamic personality, they fall in love with him."
.
Posted by The Man at 2:33 PM