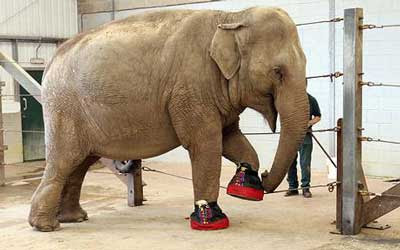 A 40-year-old Asian elephant, has become the best dressed zoo inhabitant in Britain after her keepers at Paignton Zoo fitted her with a pair of £500 slippers. She has been suffering from painful abscesses on her front feet for the past few months so her keepers at the Devon zoo decided to commission some footwear. At £250 each, the shoes did not come cheap but they do feature elephant-proof laces. They were made by Aussie Dog - a specialist company that has worked with elephants across South East Asia. Each boot is about 40 centimeters in diameter and to make a good fit keepers had to draw an outline around each foot to make patterns that were sent off to Australia.
Paignton Zoo Environmental Park curator of mammals Neil Bemment said that Gay also gets regular pedicures and antibiotic foot baths, and has aloe-vera rubbed into her feet to decrease swelling and provide pain relief. "She is nearly 40 years old that's middle-aged for an elephant - and weighs around four tons. Some elephants can be prone to foot problems," he said. "Her welfare is our prime concern, so we decided to have these protective boots made which will help in the treatment of her front feet."
.
Posted by The Man at 11:31 AM