Rare Lowchen has been missing for four months 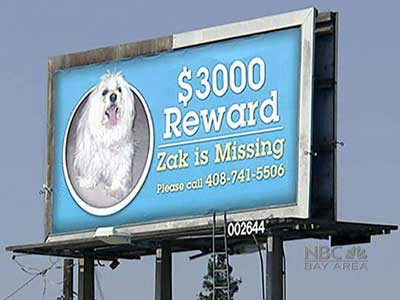 Janis and Bob McCormick are not giving up a four month effort to find their beloved dog named Zak.
Zak hasn't been seen since April 15. That's when the McCormick's say someone took the small white dog out of the front yard of their Saratoga home.
They've offered rewards, posted fliers, hired pet detectives and a psychic, but still no sign of Zak.
Now they have taken over a large billboard on Alum Rock Avenue begging for the dogs return and offering a $3,000 reward. The billboard will be up until the end of the week.
They are also plastering Zak's picture on the back of Santa Clara Valley Transportation Authority buses. The fliers will there for a month at a cost of $300 per bus.
Zak is an 11-year-old rare Lowchen and has a brother back home in Saratoga.
The McCormicks say the only requirement to get the reward is to have the dog scanned at a shelter or vet's office to verify it really is Zak.
.
Posted by The Man at 12:50 PM