Duck gets shoe support from cobbler 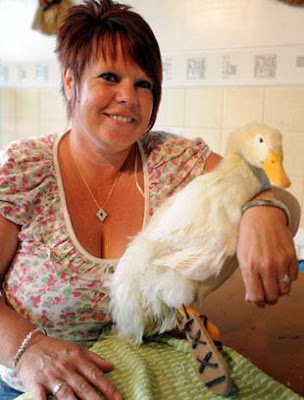 LUCKY by name, lucky by nature for this young duckling.
When the month-old bird fractured her leg, owner Allison Morgan was told by vets her only option was to have Lucky put to sleep.
But Mrs Morgan, 44, refused to give up on the muscovy duck and set about finding a way to get Lucky back on her feet - with the help of a specially made shoe.
Although the break in Lucky’s leg healed, her foot was pointing in the wrong direction, making it very difficult for her to walk.
So Mrs Morgan, an orthopaedic nurse from Lliswerry, enlisted local cobbler Kelvin Reddicliffe at the Newport branch of Timpsons Ltd to fit Lucky with a "roman sandal" to keep her on the straight and narrow.
The sandal, which has been made in three sizes to support Lucky as she grows, protects her foot and takes the pressure off her webbed feet as she walks around the garden with fellow feathered friends Daisy and Kizzy.
Mrs Morgan took measurements of the duck's foot for the cobbler, who made the sandals out of rubber resin.
Mr Reddicliffe said he was only too happy to help despite never making shoes for an animal in 39 years as a cobbler.
He said: "I have total admiration for Mrs Morgan for not listening to the vet and sticking by what she believed in."
Mrs Morgan, who has also been giving Lucky regular "physio" sessions, said: "When she’s out and about in the garden she’s not walking like a normal duck, but with the shoe that Kelvin has made she able to move much better."
The only time Lucky has to go barefoot is when she goes for a swim because the light rubber sandal causes her leg to float.
A new vet has now been found who is willing to operate on Lucky’s leg, with pins set to be inserted into her thigh as soon as she is feeling well enough.
.
Posted by The Man at 12:55 PM