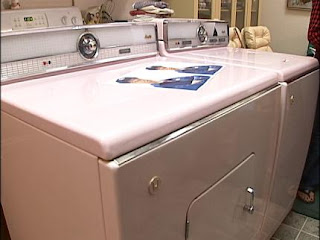 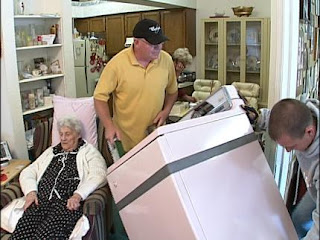 Yes, these have been working flawlessly since Mother's Day 1957!
.
The folks at Maytag Appliances know "they just don't make ‘em like they used to."
Maytag heard about a 52-year-old washer and dryer set in Sand Springs that still washes and dries like new. They've traded the owner for a brand new washer and dryer, and the old ones are headed to the Maytag museum in Michigan.
"She'd put a bucket in front of the door so the dryer would still go," said Torchy Wolfe.
Torchy Wolfe is talking about her mother's 52-year-old washer and dryer. Everything was working fine except the door latch on the dryer was broken. She called Maytag to get it repaired.
"So when I called, they said, ‘Are you kiddin' me?'" Torchy said.
They couldn't believe a 52-year-old washer dryer was still working.
Torchy bought the laundry set in 1957 for her mom for Mother's day. She says they've never had a problem with either one except for that dryer door latch.
Not only is it still working - it's pink. Could it be the only pink set still in working condition? Possibly.
Maytag offered to exchange the old set for a brand new one, and they sent Rob Longert to Sand Springs to coordinate the exchange.
It was not an easy negotiation. Jane Thompson took about three weeks to make up her mind. After all, she's had them all this time, and they still work.
"I don't think anything will clean like they would," Thompson said.
Never-the-less, the new Centennial edition washer and dryer are installed, and the old ones are on the way out the door and onto a truck.
The pink washer and dryer will soon be on display at the Maytag Museum in Benton Harbor, Michigan - a testament to durability and dependability.
Mrs. Thompson said good-bye to her old friends, but she has already told Maytag if the new washer and dryer don't work as well as her old set - she wants her old pink washer and dryer back.
.
VIDEO
.
Posted by The Man at 2:44 PM