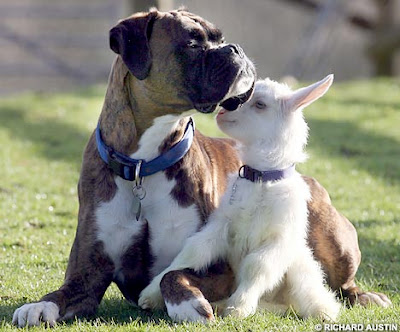 A paternal dog has adopted an abandoned baby goat as his surrogate child.
Billy the boxer has become the constant companion of the 12-day old kid called Lilly. He sleeps with the goat, licks her clean, and protects her from any dangers at Pennywell Farm wildlife center at Buckfastleigh, near Totnes, Devon.
The kid was abandoned by her mother when she was only a few hours old and adopted by paternal Billy when his owner Elizabeth Tozer began hand rearing the goat. The unusual bond has developed over the last month and the pair are now inseparable. More pictures.

I think it's funny that a dog named "Billy" adopts a goat. (Billy Goat)