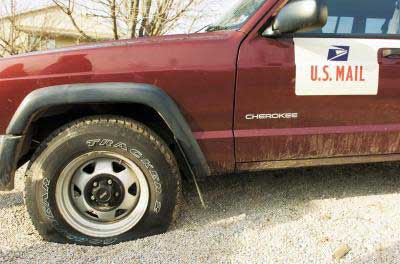 A mail carrier was trapped inside her car for nearly two hours at a home near Hanover after a pair of dogs attacked her tires, flattening three of them. Robin Barton had to summon help by cell phone on Wednesday. When the police arrived, the dogs attacked the cruiser's tire as well.
Authorities were preparing to tranquilize the dogs Judge and Justice, a Rottweiler and a pit-bull mix, before the surprised and apologetic homeowner arrived.
Stephanie Dekelbaum, the dogs' owner, called them "generally sweethearts" and blamed the attack on a tire toy the dogs had recently been given.
Posted by The Man at 9:08 AM